As painter, poet, ceramist, and writer, Švankmajerová used her art to explore the role of women in society during the transition from communism to capitalism in former Czechoslovakia. She often used symbolism informed by psychoanalytical texts to probe at gender stereotypes and to represent sexual exploitation. In the late ’50s, she met her husband and collaborator, the filmmaker and animator Jan Švankmajer, while working at a theater. They had a joint exhibition in 1961, and afterwards, Švankmajerová became art director for Švankmajer’s first film, The Last Trick (1964). She continued to work as art director for her husband’s movies for the rest of her career; Bertrand Schmitt, the director of a 2001 documentary about the pair has said, “The more I worked with Jan, the more I realized that the influence of Eva was essential. Their whole life is dedicated to their work, which takes on gigantic proportions, without separation.”

Known for her art direction and surrealist paintings, Švankmajerová’s output as a poster designer has had less attention. Yet she excelled in carving out her own approach to the form, especially in terms of integrating typography into painting. Švankmajerová’s hand-painted lettering evokes vivid sensations: when you look at a film’s title, it’s as if you can feel each letter writhe in your hands, slippy like a tongue or bristling like wood.

Communist-era Czech poster designers aren’t as celebrated as their Polish counterparts, despite the fact that designs from the ’60s onwards were marked by a similar graphic uninhibitedness and fierce energy. It was a time when the government allowed for more freedom of expression, so a new crop of filmmakers had emerged, spurring a new art of poster design to represent the strangeness of new experimental filmmaking. This is the context in which Švankmajerová first found herself designing posters. Czech designers around her were using a variety of methods to create distinctive and often surreal compositions, including woodcut, montage, and paint, but more often than not, they’d throw all the techniques together into the same design pot. There was Zdenek Ziegler and Karel Teissig, and the period also cultivated a number of female film poster designers in Czechoslovakia—including Olga Polácková-Vylealová, Clara Istlerová and Eva Galová-Vodrázková.

In this early 1990s poster by Eva Švankmajerová for the Švankmajer film Faust, we see a series of formal techniques that were important to Czech designers working after the ’60s: photomontage and collage, warped perspective, paint, and surreal motifs. We also see elements that are distinctly Švankmajerová: exquisite hand-lettering, dream-like use of symbolism, and surrealistic, barren landscapes.

Experimental filmmaker Věra Chytilová released Fruits of Paradise in 1970, an offbeat fable of attraction based on the story of Adam and Eve that centers on a woman who falls for a serial killer. The film lucidly bends genre and gender expectations, and was entered successfully into the 1970s Cannes Film Festival.

The violent scene depicted on Švankmajerová’s poster jars vividly with the title’s illusion to paradise, immediately setting the tone of the film. What is perhaps most striking about this design, though, is the colorful hand-painted lettering at the bottom of the poster. This loopy vegetable typography blends seamlessly with the organic, colorful type, which gradates from green to red as if a flower in bloom. The hand-drawn title design for Chytilová’s film looks like it might have also been drawn by Švankmajerová, as it’s style is similar to that of this poster. 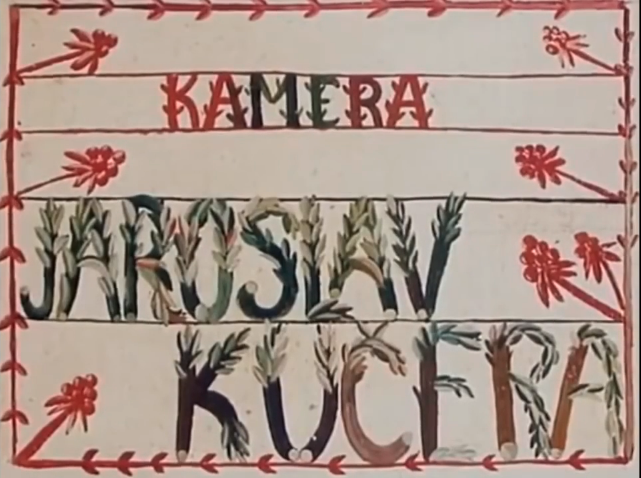 Švankmajer’s Little Otik was inspired by Švankmajerová’s illustrations for a folktale called Otesánek by K.J. Erben, in which a tree-stump with an insatiable appetite is raised by a couple who can’t have their own baby. The film won best film, best art direction, and this poster best film poster at the Czech Lion Awards.

Švankmajerová’s design is consuming and enveloping, as a painted Otik appears to eat his own mother. Her mix of traditional paint technique and photo collage implies a collision of folk tale and cinema. The knotted bark of Švankmajerová’s hand-drawn letters are painted the color of flesh too, combining the crunchy texture of a tree with the softness of the mother’s body, invoking the coming together of wooden baby and fleshy breast as depicted in the still of a breastfeeding woman. The poster and its typeface is vividly tactile.

In one of her dairy entries, Švankmajerová recalled a poster from her childhood that she especially hated. It was official communist propaganda, and depicted a large tractor driver with a scarf in her hair. The expectation that a woman should be mother, lover, housewife, and worker, which images like this one espoused, was an idea that Švankmajerová challenged in her work—in 1968, she collaged together a head from propaganda photographs of female laborers to address this kind of representation.

Švankmajerová carefully considered how she depicted female figures in her own posters, too, opting for representations that revealed an inner world instead of propping up expectations. With this in mind, it’s interesting that while designing a poster for Švankmajer’s Alice in 1988—a nightmarish adaptation of Alice in Wonderland—Švankmajerová chose to highlight a scene in which the young girl steps out of a giant doll version of herself.

Her composition plays with the doubling that you find in the film, but also the idea of split selves, and the performing of an ideal. In the poster-painting, open, red folds of the porcelain doll seem to give birth to the real girl—a metaphor, perhaps, for a young girl’s desire to look and act just like the female examples that she’s given.

In most of Švankmajerová’s posters, every line of text is handwritten. For English speaking film distributors, it was impossible to adapt her posters to English because the Czech text was so densely woven into the paintings: the swirling and curling letterforms simply couldn’t be replaced. This was the case with her 2005 poster for Švankmajer’s Sileni (translated to Lunacy), too, one of the last posters that Švankmajerová worked on before her death in October 2005.

The arrangement of two stills stacked on top of one another packs the poster’s punch; its a pairing that is on the one hand suggestive, but also raw and grotesque. These spliced images perfectly capture the uncanny recurrent images of animals’ tongues that run amok throughout the frames of the film: writhing, copulating, and getting turned into mincemeat. Angelic, feathery typography marries the two images together in uneasy harmony.

With her spell-binding, hand-painted type, Švankmajerová excelled in a rare kind of world-building, enlivening the films she painted for with an evocative sense of touch.

For a Brief, Strange Moment in the 1960s, Dresses Became Posters

In 1966, Scott Paper Co., an American company that made a range of paper products, released an advertisement for their…

When you work at a print publication, it’s easy to get fatigued by years of conversations about the death of…

Right On! Is a Powerful Little Paperback That Boldly Visualized Student Protest in the 1970s

Letterform Loupe is our new column from the team at Letterform Archive, which takes a closer look at typographic design —…

Knowing Your Design History is Crucial to Aesthetic Innovation

How the Occult Shaped Branding’s Obsession With Color

In 1928, The Saturday Evening Post, then the US’s most popular illustrated weekly, heralded “The New Age of Color.” The…

In the ’70s, the Dalit Panthers Made Pocket-Sized Magazines That Challenged Social Hierarchies in India

It’s fifty million years after the extinction of humans. Emissions have ceased, property lines have vanished, and plastic particles have…

What Is Graphic Design’s Place in an Art Museum?

This story is part of our Weekend Reads series, where we highlight a story we love from the archives. We…

These Striking Advertising Matches Were All the Rage in 1970s Singapore

With its rectangular and pocket-friendly form, a matchbox reminds one of a popular contemporary object: the smartphone. Apart from physical…

The Hidden History of Magic Eye, the Optical Illusion That Briefly Took Over the World

In the ’70s, Kamal Shedge’s Lettering Became an Indispensable Part of Life and Culture in India

If you lived in the state of Maharashtra in India during the ’70s and ’80s, you probably had the Kalnirnay…

For a Brief, Strange Moment in the 1960s, Dresses Became Posters

In 1966, Scott Paper Co., an American company that made a range of paper products, released an advertisement for their…

When you work at a print publication, it’s easy to get fatigued by years of conversations about the death of…

Right On! Is a Powerful Little Paperback That Boldly Visualized Student Protest in the 1970s

Letterform Loupe is our new column from the team at Letterform Archive, which takes a closer look at typographic design —…