Berlin is, and always has been, a city of activism. As such, many of the posters you’ll find plastered across its streets are bright, typographic calls to action. They’re products of collaboration and a shared vision, drawing attention to an upcoming rally or political event.

The Berolina of the title refers to the female personification of Berlin, best-known in the form of a 1895 statue that once stood in Alexanderplatz. It was removed from the square in 1942, likely melted down for war material, and has become a tragic symbol for the fate of the women’s movements during the country’s National Socialist years. Ever since, the name Berolina has been invoked for German feminist projects of all stripes.

The book’s posters are as diverse as the various feminist movements they represent. Informative comics, photo montages, sketchy illustrations, and multi-colored prints sit side-by-side, representing the different design tactics that activists have taken to get their message heard. Together, the collection provides insight into all the topics that feminists have dealt with—and still do. Here, we take a closer look at five of the posters from Gröschner’s book.

Half-a-century after getting the right to vote in 1919, German women still found that they faced inequality every day. The first poster in Berolinas Angry Daughter is a leaflet issued by the Aktionsrat zur Befreiung der Frauen (Action Council for the Liberation of Women), which articulates many of the frustrations that women living in Berlin felt during the late-’60s. Printed on both sides of a single sheet, it features a short comic strip that aimed to ignite protests on May 1st, 1969.

The comic’s protagonist is an unnamed everywoman who spends her days laboring over the washing, cooking, cleaning, and taking care of her children as her husband smokes on an armchair. As she becomes more aware of the oppressive structures around her and finds solidarity with other women, the comic’s panels become larger, reflecting the sense of liberation that occurs when allies meet. 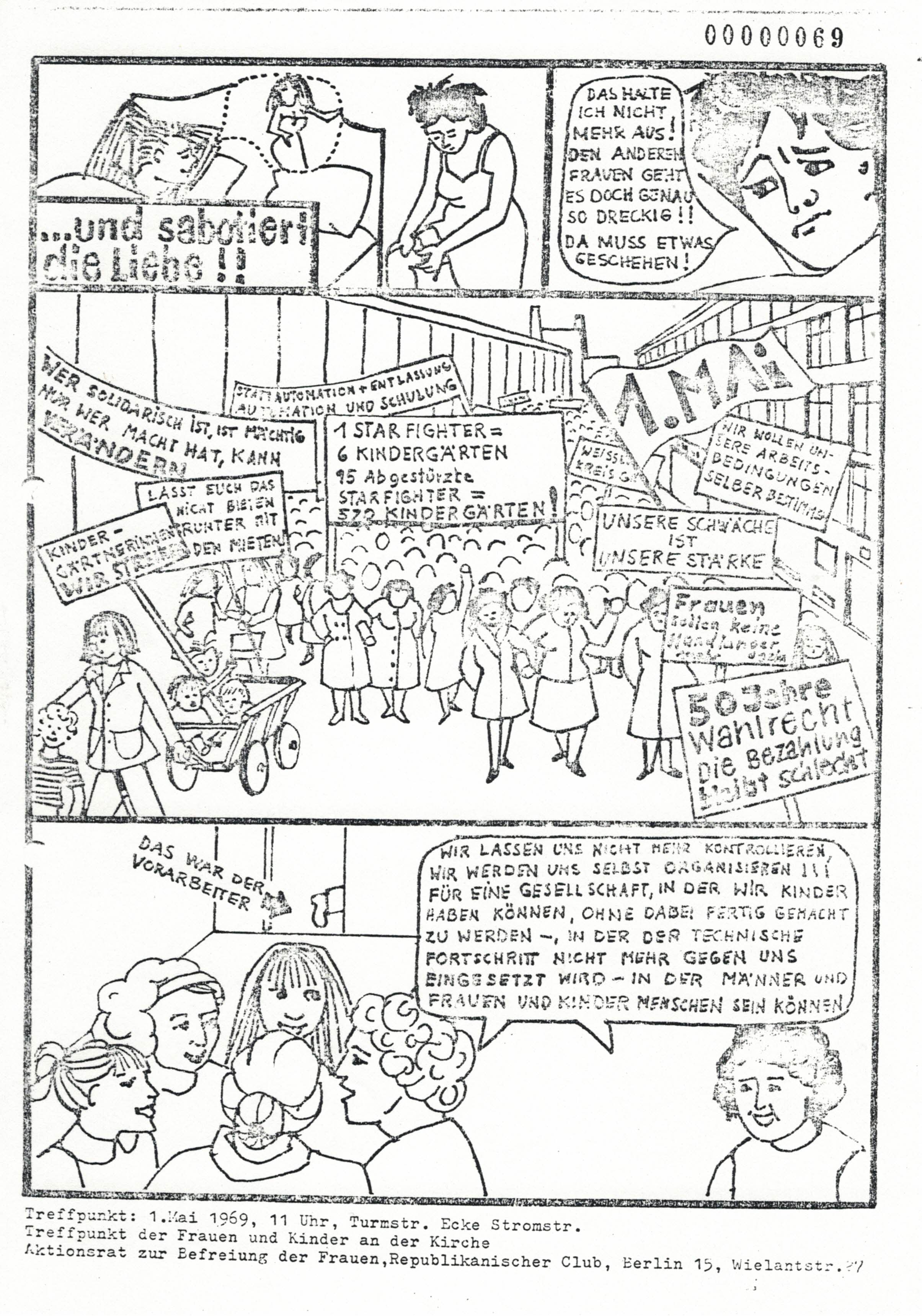 In the 1970s, women could be sentenced to up to five years for having an abortion. Even still, several hundreds of thousands of women had illegal abortions every year, often at great risk. This poster emerged out of the second wave of feminism in West Berlin, which worked towards the legalization of abortion.

“The Federal Constitutional Court has ruled against women,” proclaims the first line of its text. Behind it are a series of photographs of the male judges who decided in the early 1970s that §218 of the West German penal code, which prohibits abortion, should remain unchanged. One of the women depicted on the poster scrawls “Abort” across the judges faces in angry, capital letters. Her ally holds up a sign that reads “We won’t obey this verdict. §218 has to go” and announces two upcoming protests.

For a long time, women were at the mercy of male doctors who prescribed the birth control pill, which they profited from, and which affected women’s hormones in ways they didn’t understand. In the early ’70s, many women in Germany and beyond started to question certain taboos around reproductive rights, and several movements sprung up to encourage women to learn more about their own bodies. This poster was issued in the ’80s by the Feministisches Frauengesundheitszentrum FFGZ (Feminist Health Centre), a West Berlin health organization that taught women about contraception and offered STI treatments as well as self-help workshops.

The poster announces that FFGZ does not prescribe birth control pills: a bold move for the time. Instead, they encouraged forms of contraception that didn’t require hormones. At the top right hand corner of the poster, a hand holds up a speculum—the tool used for pelvic exams—in triumph. Within the context of the design, the speculum becomes a symbol for discovering and taking responsibility for one’s own body.

In the 1980s and 1990s, Afro-German women, Jewish women, female migrants, and many other female-identifying minority groups banded together and formed new activist networks. Until then, the women’s movements in both East and West Germany were primarily white.

This poster, which was created in the 1990s after Germany’s reunification, contains a message that we now consider part of intersectional feminism. The statement “don’t be quiet” is a reference to Black feminist Audre Lorde, who demanded that everyone should speak up against injustice and discrimination because “silence won’t protect” you. Lorde spent a lot of time in Berlin, especially at the end of 1980s and the beginning of the 1990s. She taught there and brought together German women of color, inspiring them to define themselves as “Afro-German.” Independent women’s shelters issued this poster throughout the city.

Many contemporary feminist projects no longer focus on a single country or city; rather, they are part of larger networks of solidarity that are spreading worldwide. In 2016 for example, Polish Berliners organized a protest in solidarity with women in Poland, who were speaking up against the tightening of the country’s abortion ban. Posters like this one, designed by Beata Śliwińsk, could be seen across the streets of both Warsaw and Berlin.

“As a graphic designer and illustrator, living and working in Warsaw, I was asked by the activist group Pogotowie Graficzne (Graphic Emergency) to support them with the creation of an open access poster,” says Śliwińska. “I created the poster really fast, following an impulse. I first depicted the image in my head, and I knew exactly what I wanted to design.” Śliwińska predominantly works with collage and designs posters, books, magazine covers, and ads for fashion and music clientele. For this print, she layered women’s mouths on top of one another so that they take on the shape of a vagina, forming a striking symbol that encouragers viewers to speak up.

In 1971, a film called Shaft—a breakthrough for Black cinema—was released. It was what Junius Griffin, then president of the…

Bauhaus Typography Is More Complicated Than You Think

Geometry, clarity, functionality, and a deliberate lack of ornamentation. These are the ideas typically associated with Bauhaus typography.  Famously, students…

In CAPS LOCK, Ruben Pater Untangles the Relationship Between Graphic Design and Capitalism

Two things about capitalism: graphic design is totally bound up with it; and it really has to end.  You won’t…

Do Gender-Neutral Pronouns Need Their Own Glyphs?

As gender-neutral pronouns become more commonplace in spoken language, they haven’t yet found a secure perch in written text. With…

About a year and a half ago, peaceful protests broke out across India against the discriminatory government policies–specifically, the National…

Ken Garland, who died in May at the grand age of 92, was an enigmatic figure in the graphic design…

There Is No Such Thing As Neutral Graphic Design

What does it mean to design “normal” things for “normal” people? Western society defines certain individuals and communities as average…

If “Labor Is Entitled to All It Creates,” Where Does That Leave Graphic Design?

One of the most enlightening, empowering, and transformative experiences I had as a design fellow at the Walker Art Center…

How Can Designers Address Power Inequity? Start Small and Focus on the Local

For many designers, the past year’s near-constant social unrest has made the idea of addressing power inequity through design feel…

Parsing dense government reports that are hundreds of pages in length, set in 12pt Times New Roman, and full of…

Berlin is, and always has been, a city of activism. As such, many of the posters you’ll find plastered across…

In 1971, a film called Shaft—a breakthrough for Black cinema—was released. It was what Junius Griffin, then president of the…

Bauhaus Typography Is More Complicated Than You Think

Geometry, clarity, functionality, and a deliberate lack of ornamentation. These are the ideas typically associated with Bauhaus typography.  Famously, students…

In CAPS LOCK, Ruben Pater Untangles the Relationship Between Graphic Design and Capitalism

Two things about capitalism: graphic design is totally bound up with it; and it really has to end.  You won’t…